Long-term plans: history of the gardens

Manor Fields was built in the early 1930s around the core of a late 18th-century garden. The central copse, or woodland glen, with its specimen trees and winding paths, represents this era and the rockery in the Dingly Dell behind Girton House may also be a survival. 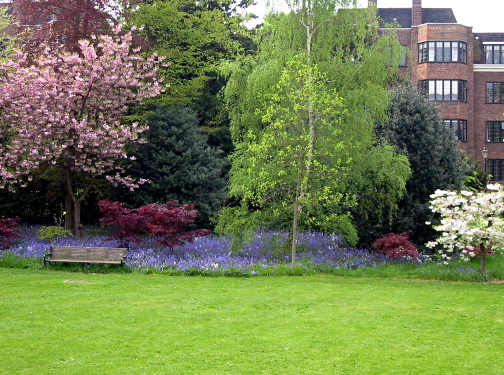 The main lawn at Manor Fields and the central copse or woodland glen.

The planting at the time the estate was built was relatively formal: a rose walk, from Somerville House to the Hill gate, with 800 varieties, azalea beds along the main estate road, symmetrical planting round a new formal pond, a clipped yew and privet hedges round the houses.

Drivers of change
Invasive plants and diseases, climate change and the passage of time have all influenced and changed the gardens since their original construction and will continue to do so in the future.

Invasive plants and diseases
Invasive plant diseases have probably been the cause of the greatest visible landscape changes around the estate. In the 1960s, Dutch elm disease wiped out a row of mature elms along the north boundary. In the past decade or so, honey fungus (essentially ineradicable) has spread through large parts of the estate, particularly around the boundaries and susceptibility to honey fungus will be a major constraint on shrub and tree choice from now on. We have already lost many mature trees, such as a number of chestnuts behind the Green Man and more recently cherry trees on the main lawn. Many of our commonest hedging shrubs are susceptible, for instance laurels and, especially, privets. Rhododendrons have been dying too: they are also susceptible to Phytophthora root rot.

While we have been spared the worst invasive species so far, for example Japanese knotweed, and our common rhododendron is controllable within the garden, pernicious weeds such as Circaea lutetiana, or enchanter’s nightshade, need to be kept under control.  Lutetiana is difficult to eradicate – there are spreading colonies at the Dingly Dell, Glenalmond, Selwyn, Keble and Bede Houses and around the estate perimeter.

Climate change
It is unlikely that the hurricane of 1987, in which we lost a few trees around the estate, can be put down to global warming, but we are experiencing more extremes of weather. The longer-term impact of variable weather is likely to be a factor in the selection of new plants for their robustness.

The passage of time
Gardens cannot stay still: beds need periodic replanting and trees replacing. We have lost a number of the original specimen trees through old age and as far as possible we replace them with new specimens, such as the ginkgo, or maidenhair tree. As a conservation area we are obliged to do this anyway. The replanting of beds around the buildings or the pond area becomes an opportunity to shift the style of planting in the direction set out in this section. 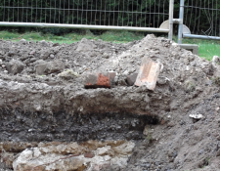 In many areas the soil has become exhausted. Shrub roots are often exposed. Some problems may date from the creation of the estate: some areas are of heavy clay, others contain large volumes of rubble close to the surface, including the old bowling green (pictured above during an archaeological dig), perimeter areas and the areas behind Bede, Balliol, Mansfield, Armstrong and Gonville Houses. Rubble behind Harvard House appears to be wartime damage from the one bomb which fell on Manor Fields. In many areas around the houses, through years of building activities and the use of scaffolding, deep-level soil compaction has occurred. In the past decade we have stepped up recycling of compost and wood chip to offset this, but there remains a lot to be done. 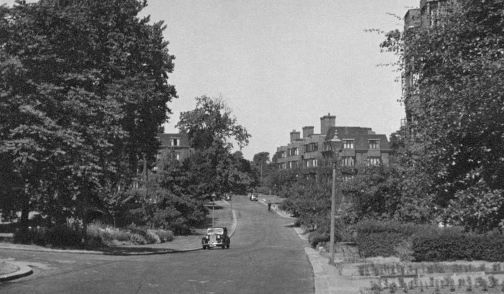