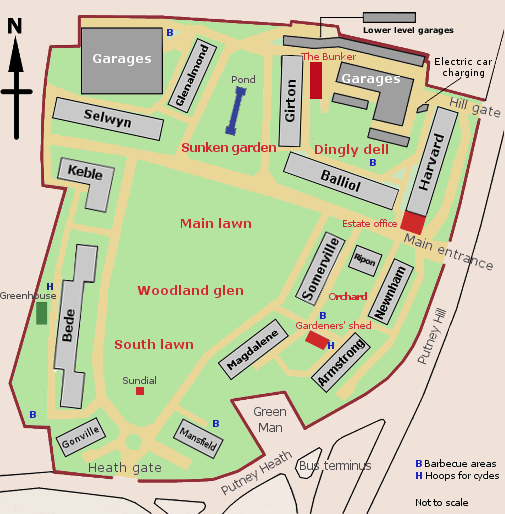 Manor Fields is a private estate on Putney Hill in south-west London. Its 228 flats are grouped in 14 arts and crafts-influenced houses, created in the 1930s as homes of quiet refinement, and surrounded by the third-biggest private gardens in London.

The freehold of the estate is owned by The Manor Fields Estate Limited, or MFEL, a limited company, the shareholders of which are all the owners of flats held on 999-year leases. Some flats have shorter leases; lease extensions are available.

Most of the flats at Manor Fields are in purpose-built houses of three, four or five storeys and there are two cottages, which used to be the estate’s own restaurant.

The houses are named mainly after Oxford and Cambridge colleges, in one case ‒ Harvard House ‒ after an American university in the Massachusetts city of Cambridge.

Most of the flats have three bedrooms but there are some with one or two bedrooms and others with four or more. The largest house is Bede, with 32 flats on four floors.

Each flat has its own storage area and there is also storage space for bicycles. Additional storage areas can be rented through the estate office.

A security guard is on duty throughout the night and among other things, there is high-speed broadband for the Internet, email and some cable television services and a connection to television satellite dishes in all flats. Residents also have access to a meeting and functions hall called the Bunker and parking is free throughout the estate. Many flats have their own garages, though some are owned by the estate and can be rented.

Manor Fields is a working estate, there are always works taking place. Whether that be the gardeners with their gardening equipment of tractors, mowers, chainsaws, etc or refurbishment of individual flats or other works to keep the estate always looking outstanding.